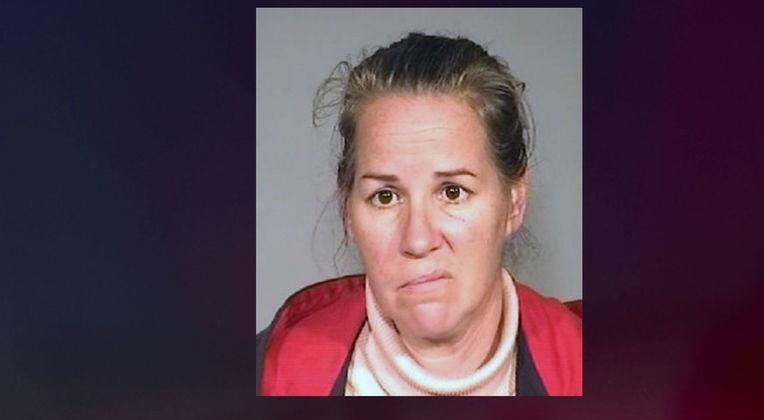 Fresn, CA – California mom Joy Frances Collins, 44, and her two children were attempting to catch a bus in their hometown of Fresno when a train blocked their path.

According to the Fresno Bee, the family needed to take the bus home, so Collins encouraged her children to go under the train when it was sitting idle to catch the bus on the other side.

Her 9-year-old son went first and made it successfully. But her 8-year-old daughter, Joyanna Harris, was reluctant to cross.

The mother allegedly shouted “hurry up” and the child obeyed. Fresno Police Chief Jerry Dyer said at the press conference:

“Upon being encouraged by the mother to cross the track, she too made her way underneath the rail car and attempted to get to the other side.”

As Joyanna crawled under the train, it lurched forward and she got stuck.

James Whitehead and Christy Miller live near the tracks and heard screaming when the train started to move, they told the Fresno Bee.

The little girl was dragged about 500 feet with the train as her mother chased behind. Whitehead ran along the train but was also unable to help Joyanna.

By the time the mother was able to pull the child out, she had already died from serious injuries. Miller said she saw the child on the tracks during the incident:

The sheriff said the mother had told her children to crawl under the train several times in the past and had been contacted by Child Protective Services.

This time, the train was only stopped for about 12 seconds before it started to move again, said Dyer. He added that the mother is “hurting.”

Local residents have called for a fence to be put up near the train tracks.

A Florida Father Shoots His Older Son Dead to Save The Other Child During Dispute. Police Say It Left Him ‘Shattered’
Mom Is Warning Others After This Fatal Mistake – Infant In Texas Died After Babysitter Let Her Nap in Car Seat.