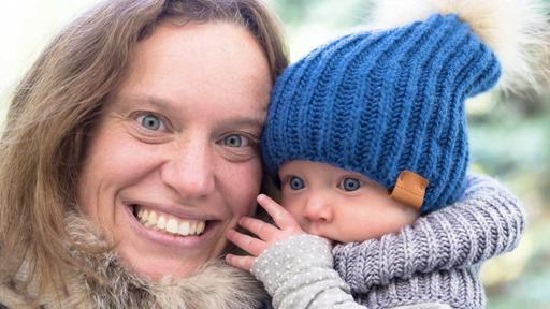 Gjermund Roesholt, a loving husband, and his wife Valerie Theoret from Canada loved the outdoors.

Short after she got her maternity leave from her teaching job, they went to a remote cabin in the wilderness of Yukon to do some trapping with their 10-month-old, Adele, CBC reports.

“Being on her maternity leave, now was the opportunity for them to all go as a family. So they just took their baby and went out on the trap line.”

But on Monday, their stay in the wilderness came to a tragic end.

When Roesholt returned home to their cabin that day, he was charged by a grizzly bear. He pulled his gun and shot the bear, killing it.

That’s when he discovered the remains of the 37-year-old mother and their 10-month-old daughter, who had been mauled to death by the animal.

The dad sounded an emergency beacon to signal authorities at the closest town nearby, but it was too late to save his loved ones.

A mother and her 10-month-old daughter were mauled to death by a grizzly bear in the Yukon. A friend describes Valerie Theoret as being “so full of love and amazing,” who was happy to be a new mom. More here: https://t.co/OjbwrPposb pic.twitter.com/XLsjebIGQJ

Yukon coroner’s office confirmed their deaths in a news release and said the attack likely occurred while the mother and child were on a walk.

“It appears they [Theoret and Adele] had been out for a walk when the incident occurred, sometime between 10 a.m. and 3 p.m.”

Beaupré told CBC that the two were “competent bush people”:

“They were, I’m 100 per cent sure, well-prepared for anything that could have happened. But, you never know.”

He said the sudden loss of the beloved mother and child was a “big, big blow” to their friends and family.

According to the National Park Service, you should play dead if attacked by a grizzly bear. If they continue to attack you, concentrate on kicking at the bear’s face.

If you are attacked by a black bear, do not play dead. Try to escape or kick at its face if necessary.

When heading into bear country, bear pepper spray is a good line of defense. It is made specifically to ward off aggressive bears.

Police are still investigating the mother and child’s deaths.

After A Photo Of Their Latest Display Has Gone Viral, Walmart Is In A Big Trouble!
Only In Las Vegas: Morgue Employee arrested for pimping out corpses for sex