Spanish superstar Rafael Nadal has been the brand ambassador of Babolat for a very long time. No doubt, this is the reason they honored him with a new racquet series: the Pure Aero Rafa.

This is the Spaniard’s first signature line, and it features a blend of various bright colors like yellow, purple, and orange. This colorful combination was specifically chosen by him and he revealed why in a recent interview (also seen in the video above):

“I just like the bright colors. I think it’s important to be happy when you are on court so I like powerful and strong colors. So, I like this one. We worked together with Babolat to make it happen and I am super happy with the results.”

In addition to it’s colorful skins, the Pure Aero Rafa was created using the most advanced technology. It now has a more aerodynamic design, allowing for a greater swing speed (and who doesn’t want that, am I right?) It also has better vibration dampening.

This awesome racquet is currently available to purchase online and at all  major tennis retailers around the world. 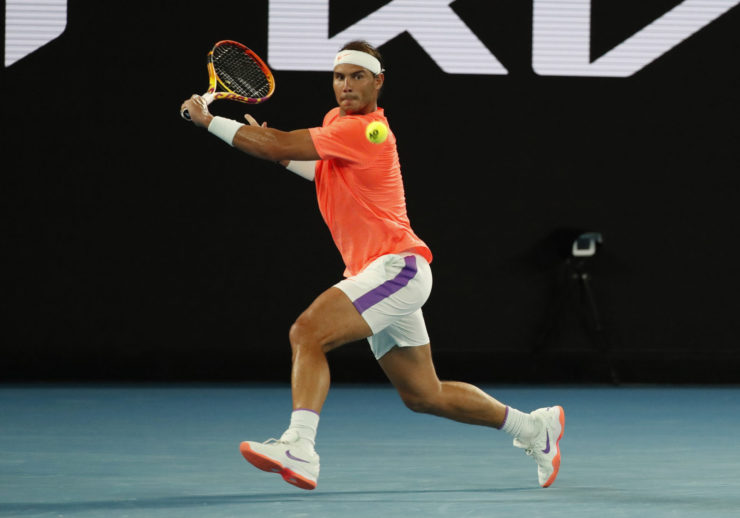 What 2021 has in store for Rafael Nadal

There’s no doubt that Rafa is jazzed about his new racquet line, however, he has only played once with it so far this year. Unfortunately, the Spaniard suffered a back injury that forced him out of both Rotterdam and the Miami Open. Currently, he is focused on the European clay-court season.

Of Nada’s 86 titles, 60 have come on clay, which also happens to be his favorite surface. He is looking to extend his clay record this year and he will start with the Monte Carlo Masters.

RELATED:
Do The Pros Really Need New Balls During Their Matches?

The World No. 2 has won the tournament 11 times and will be going for his 12th title in 2021. If he’s healthy, there will be nothing to stop him from doing so when the event begins on 11th April. All the best, Rafa!

You may also like...
Related Topics:Babolat, gear and accessories, Rafael Nadal

Your Favorite Minions Have Teamed Up With Wilson For Limited Edition Minion-Branded Racquets And Gear
SHOCKING: Roger Federer Retires From Professional Tennis And The Tennis World Is In Mourning