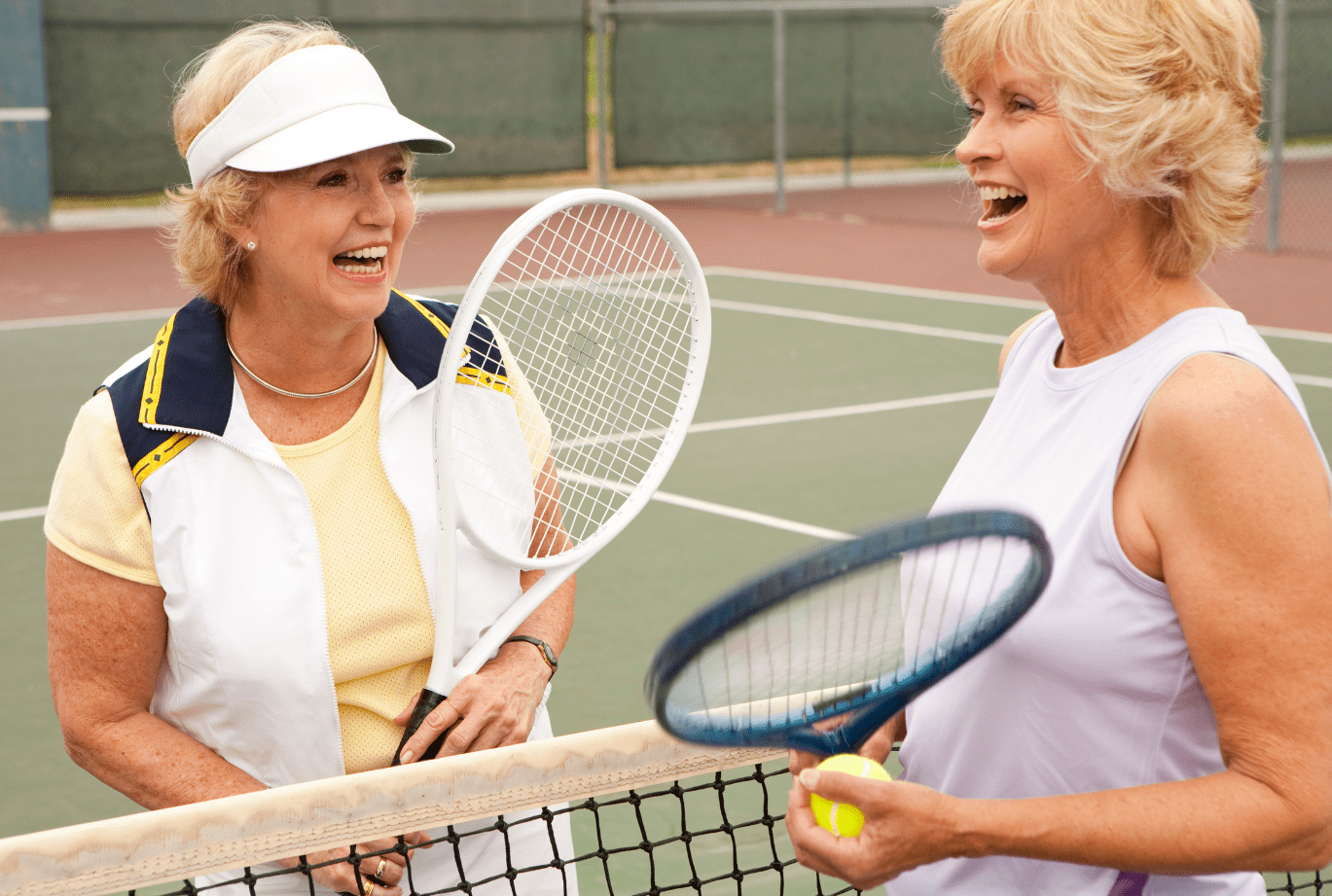 Of course, there’s a fashion component to playing tennis, one ever present yet rarely acknowledged. Just look at the way we all check out the WTA players’ kits when we watch the slams. And for a run or a spin class, we’re fine with a t-shirt, leggings, and trainers.

Not so with tennis. I think it’s the damn skirts.

The skirts remind us that we’re women and make us hyper aware of the pressure to look pretty, or at least, cute. But hey, when we look good, we feel good, right? And the coaches say, when we feel good, we play well. So yes, I admit, I do spend plenty of time on Tennis Warehouse, and more money than I like to say on pretty, color-coordinated outfits or dresses. Looking good boosts confidence and your game follows suit. Or that’s the goal, anyway.

Alas, my tennis wardrobe travails could fill a book. Something is bound to go wrong at least sometimes, when so much neurotic attention is paid to one thing. Or in my case, a number of times. Like I’ll be getting dressed in the dark early morning, believing I’m putting on a black skirt when it’s really navy blue, clashing my pink top, but I only discover it when it’s too late. Or when I’m certain my white sports bra won’t show up beneath my favourite (therefore, worn out) black top, except it does in a huge telling splotch that fully outlines my girls. Or I might be playing some petite young thing with a wee waist and a beckoning rear who rocks her white tee and black shorts, so I feel completely ungainly in even my favorite outfit, and not confident at all.

Three of my worst wardrobe malfunctions on court are for the books, never to be forgotten. Ever. I call them my Lulu Booboos. Now, these have not changed my love and fidelity to Lululemon. I’ll always be loyal, and if anything, I think they don’t make nearly enough tennis stuff. But these three mishits did involve my beloved brand.

First off, I’m a size 10 in Lululemon skirts. That’s my size. 10. Always and forever. Except when the Lulu skirt in question is made of non-stretch cotton. Most Lulu skirts have a wide elastic waistband and the skirt in similar, forgiving, that is, give-ing fabric. This wasn’t one of them. It was a very smart, striped cotton skirt in grey, black, and white, with the usual elastic waist. Think tennis skirt with a corporate edge. I seized my size 10. Didn’t even try it on.

Although I set an alarm for my 7:30am Friday clinic, I overslept the way I always did. I leaped into my kit laid out the night before, ignoring a pulling sensation. Pull schmull. It was on me, wasn’t it? I arrived at the courts two minutes late, and jumped into drills with my two companions and the male coach.

Then I felt it again. Big time. I tugged at my skirt once, twice, and again, of course, flubbing every other half-court warm-up shots. I fidgeted. Tight was an understatement. When we had to stop to pick up balls, one of my co-players marched toward me with purpose than in a low voice but with full-on disapproving urgency, “Pull your skirt down!”

Every time I bent over, I had apparently given them moon pie. There simply wasn’t enough fabric for adequate coverage, not by the longest shot nor multiple short shots, either. Fortunately, I had an extra black skirt in my tennis bag for emergencies. I ran off-court, changed, heaving a sigh of relief. I’m sure my two co-players did, too. God only knows what the coach thought.

RELATED:
Things That Only Tennis Fans Will Understand

Another time, I was playing a doubles match partnering with a good friend, and things were looking good. Although we had lost the first set on a grim tie-breaker, we took the second set easily, 6-2. We were in the fourth set, 4-3. I should add we were playing at one of those clubs with a huge viewing gallery above the courts that allowed viewers complete visibility. Were a player to look up, she would see just how many people were watching her and even what they might be thinking.

On we played, feeling confident, comfortable. By that time, our teammates had all finished their matches and were in the gallery, clapping and cheering. Our opponents’ teammates were there too, of course, looking at us with sceptical, eagle eyes. There were also a few club member kibitzers there to kibitz.

I was on the backhand side, striding to take an approach shot but just as I swung back to hit, a sharp pain pierced me, right in the heart. I let out a small audible whimper, and of course, the ball fell lamely off my racket. I started breathing deeply in a kind of panic. Was I having a heart attack? Did I need to go to an emergency room?

“Are you okay?” My partner asked.

Our two opponents  walked over to the net. “Is she okay?” one asked.

Short of breath and perspiring, I clutched at my chest, and that’s when I felt it. The thing that caused me pain.

The faintness was not health-related. I knew what the problem was. What I’d felt was the curved underwire of the left side of my sports bra. It had risen up in the action and poked a hole through the fabric, jabbing me right between my ladies. My voice was faint, because I was painfully aware that over a dozen people were watching my every move. And there was no place to hide.

Not knowing what else to do, I walked to the baseline, turned to face the back fence, and stuck my hand into my top. At first, I tried to push the wire back in. It refused to budge. Then tried valiantly to pull the dratted thing out. As in all the way out. I tugged and I tugged struggling for two long, sweaty, horrifically embarrassing minutes.

No longer concerned about my well-being, my partner said, “Uh, what are you doing?”

I did not answer. Instead, I gave one big yank with full force, and, fwip, out it came. I held it up triumphantly in the air… like a sword, like a baton, like a gosh darn flag. And then, not really knowing what to do, I tossed it whereupon it fell upon the backcourt with a plink, plink, plinkety-plink for all to see and hear.

The crowd in the gallery roared with laughter, laughter that rang in my very red ears as we resumed the set. Which, of course we proceeded to lose. Overcome with embarrassment, I couldn’t get back into the match.

The biggest booboo of all

Then there was the worst malfunction of all. I was solo on the court, my first year playing tennis. I was having a lesson with a male coach, one I usually shared with a friend who was ill that day.

With just half an hour to go in what I recall was a pivotal session on top-spin lobbing, the back hook on my Tata Tamer chose that very moment to slip unceremoniously out of its fabric loop. One strap detached completely, and my right boob was left without an anchor, cast at sea. Cut loose, it escaped. I had zero support. My tata whipped and dodged wild, completely untamed.

RELATED:
You Don't Have To Be A Pro To Train Like A Pro

Let me be clear. I’m not talking about the three hooks in the center of my back, responsible for fastening the bra itself. That would have been no big deal. I am quite able to hook my own bra back on. No fuss, no muss. This wasn’t that.

This was the hook at the end of both shoulder straps that links itself to the bra, located in that impossible-to-reach spot on your back. I would have had to throw off my top, unfasten the bra, re-hook the offending strap, then put the damn thing on again, and the top after it. To do that, I’d have to run all the way across four courts, exit and descend two flights to the ladies changing rooms losing precious (and not inexpensive) lesson time.

I glanced at the courts beside me, all filled with intense, competitive, higher-level tennis women deeply absorbed in their drills. Only two I knew and very slightly at that.

I thought. I had two choices. Either would eliminate the need to go to the changing rooms, but both would be embarrassing as hell. I could interrupt not only my session but the sessions of these intimidating women, and ask one of them to help me uh reset my assets… in full view of everyone. Or could I ask my coach to assist, in what would be a very non-sexual way after all, while lifting the back of my shirt so he could do something that would take three seconds, tops, if he knew what he was doing. I made the decision.

Not just a tall tennis tale

And now I must stop, dear readers, for I do not know you well enough to be comfortable relaying the end of this terrible true story. Suffice it to say that while I’m able to look back at this incident with a small measure of mirth, the embarrassment that overwhelms me is still so fiery now that I could faint dead away if I continue to think about it. I wish with all my heart that I’d just made the right—and might I add—sane decision. I wish I had just gone to the changing room like any normal woman would have, to hell with the private lesson. But what can I say? Tennis. It makes you crazy.

Now, go off and think about as you get dressed for your next court session. 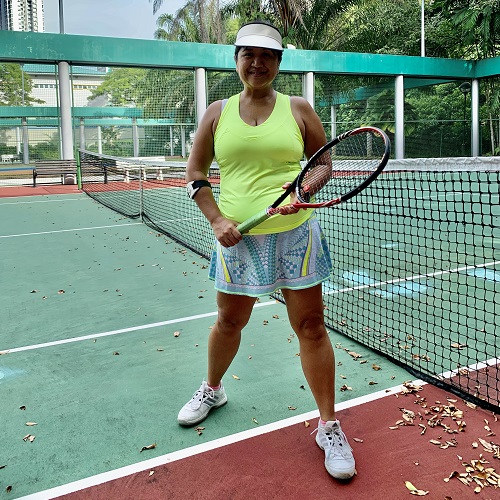 Formerly a badminton player who grew up in Manila, Philippines, Noelle Q. de Jesus is a tennis addict based in Singapore where she learned the sport in 2011 at the age of 42. Since then, she has played in two ladies team doubles leagues making her way up (and down) the roster. Some seasons, she will play in the singles league, and she is on the court 3-5 times a week, depending on the weather. She plays singles with her husband, and mixed doubles with their friends. Noelle is a freelance writer and editor, has published two books of short fiction, and has an MFA in Creative Writing from Bowling Green State University. She and her husband have raised a daughter and a son and fervently wish they would both pick up tennis.

You may also like...
Related Topics:editorial, everything else, humor, tennis apparel