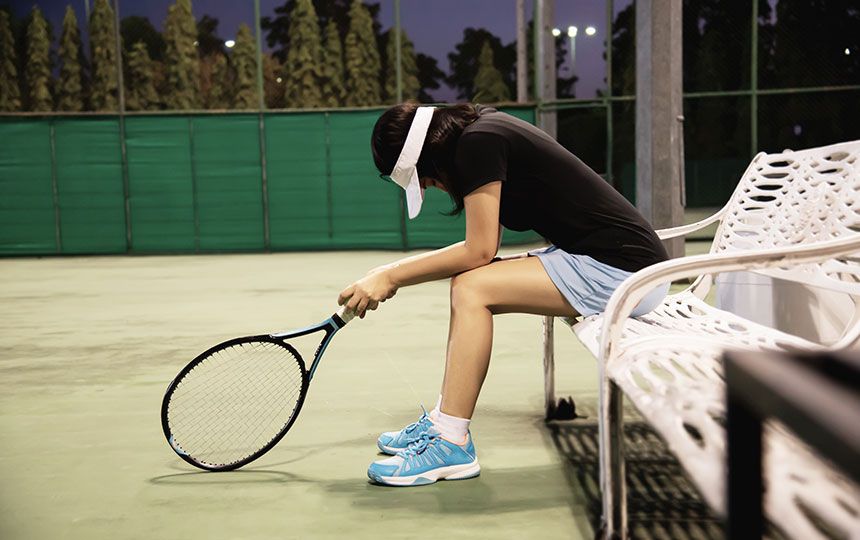 Don’t let the title fool you… our goal at Tennis Life Magazine is to give you the tools you need to WIN matches, not lose them. But sometimes, pointing out the most common costly mistakes (and offering corrective suggestions, of course) is just what players need to help them recognize those patterns in their own games, and hopefully, fix them faster.

These are just our top 10 things that rec players do most often that can cost them not only their games but their matches:

1. Going for winners from behind the baseline.

There is a time and place to rip a winner, but standing behind the baseline is not one of them… unless you are Federer. Then by all means, rip away.

When you’re behind the baseline, you have a lot more open court to cover so you will have to hit the ball harder and risk hitting out or into the net. Instead, be patient and keep the point going, and save the winners for when you are inside the baseline for those shorter balls.

2. Swinging on high floating volleys inside the service box.

A floater is a gift. Your opponent is already backing up, dreading the consequence. DO NOT return the gift with either a long ball, or one that is deep — they might get it back for a winner of their own.

Instead, use your short angled volley, keeping the ball in and as far away from the opponent as possible.

3. Hitting the same first and/or second serve for the entire match.

Even if you have pace and spin, your opponent will eventually figure it out and use it against you. Rather, you should mix it up with different speeds and placement; keep them wondering what you’ll do next. On a big point, hit a more conservative first serve to ensure it goes in. If you’re up 5-2 and serving 40-15, go fo a big first serve aiming at one of the lines because you have a solid “score cushion.”

RELATED:
When And Why You Should Serve Down The "T"

4. Hitting groundstrokes into the net.

If you can’t get the ball over the net, you literally have zero chance of winning the point. Aim for about 5 feet above the net and use your top spin, and if you’re at or behind the baseline, make sure and hit hard, as the topspin will bring the ball down into your opponent’s court.

5. Trying to put away overheads from behind the service line.

Trying to put away an overhead from the baseline is pretty much the same thing as trying to ace your opponent. You don’t want to risk hitting it into the net, so, instead, be patient and wait for a put away at the net.

6. Not changing up a losing game plan.

If it’s not working and you don’t change it, then it will continue to NOT WORK. If you’ve lost the first set badly, then change it up. Do everything you haven’t done yet and then figure out what works best.

7. Having only one game plan.

Just like number 6… if your A-game isn’t working, then you need a B-game… and maybe a even a C or D-game. Never just have a game A because you will be too easy to figure out. Practice your strokes with a ball machine and in your friendly matches.

8. Hitting drop shots from behind the baseline.

Unless you are Roger… or Serena… or Novak…or Nadal…(you get what I mean) do not… I repeat… DO NOT ATTEMPT A DROP SHOT FROM BEHIND THE BASELINE. It will be easy for your opponent to read and you will be too far behind the baseline to run in when they return your drop shot with one of their own.

RELATED:
5 Reasons Why You Should Practice Your Serve

Drop shots are much easier to make when you are inside the baseline.

9. Insisting on playing how you want, instead of how to win.

10. Using a game plan or tactics that you really don’t own yet.

Anything you haven’t mastered, that you haven’t quite figured out how to deliver… don’t do it in a competitive match. You will be setting yourself up for errors. Instead, use the shots you are most comfortable with, and use placement of those shots as your weapon.

11. Playing every point without considering the score.

Always play the score. Your shots should not be the same if you are up 5-2, serving at 40-0, versus if the score is 4-5, and you’re serving at 40-40. Keep the ball in at all costs on big points (make your opponent beat you!); and save those bigger, riskier shots when you have some “score cushion.”

If any of these issues apply to you, give our suggestions a try… and win more matches!

For Your Protection, Consider The USTA’s COVID-19 Safety Tips Before Hitting The Courts
WATCH: Movie Review And Trailer: “First One In” Offers A Hilarious Glimpse Into Country Club Tennis