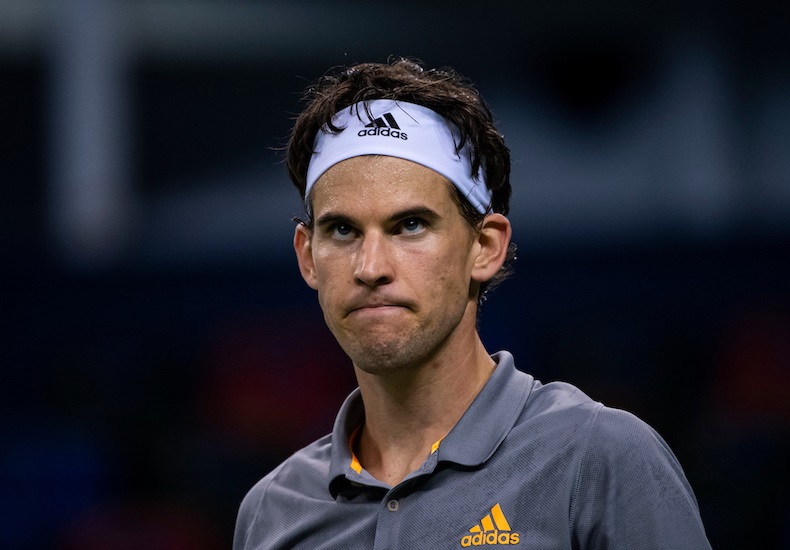 I was brought up believing that those who have should help those who have not. Seriously… it’s the human thing to do. Ever since I was a teen, I’ve given both my time and/or money to various causes and charities – and I’ve never had much to spare of either. So, when I read that players like World No. 3 Dominic Thiem who have “made it”, are whining about pitching in to the Player Relief Fund which will help the lower ranked players stay in the game during the pandemic, I’m both shocked and disgusted. Even 324 ranked Arthur De Greef is against it, and he is an actual beneficiary of the program. He also has some sponsorship money, however, which is probably influencing his line of thinking.

Apparently, multi-millionaire Thiem doesn’t want to contribute a single cent because, according to an interview in Krone (I had to translate), he believes:

“No tennis player is fighting to survive, even those who are much lower ranked. No tennis player is going to starve […] I would rather give money to people or organizations that really need it. There are many, many players who don’t put the sport above everything else and don’t live in a professional manner. None of us top players got anything handed to us, we all had to fight our way up. I don’t have the guarantee in any job that I will do well and earn lots of money.”

Really? His parents were already tennis coaches at a tennis academy when Thiem first picked up a racquet. So, he had free room and board, two FREE coaches, AND an academy at which to practice and train. Tell me again, Thiem, how you had nothing handed to you? Snob much? ?

I’m just going to drop this video by WTA World No. 620 Ines Ibbou right here because I must, and when you watch it, you’ll know why.

Dear Dominic, Your last words were hurtful to say the least, the reason why i decided to write you this open letter. Hopefully you’ll change your mind about me and many of us sharing the same situation after watching this video. Don’t get me wrong, i don’t blame you for what you are or this current situation because after all, it’s mainly up to national and international federations to look after tennis family and sort out difficulties, for the sake of this sport. But this answer is a way to bring light to our situation and maybe also protecting our integrity… Our voice deserve to be heard also… Thanks for those who helped me put my anger into words, and words into images??

Hopefully, Thiem’s crappy attitude has changed since that interview because the WTA, ATP, ITF, and the four governing tennis bodies of the Slams have announced how it will be distributed, and it’s not how he thinks. First, the money will be divided evenly among women and men, and will go to both singles and doubles players. Then, the WTA and ATP will oversee the distribution of the money, which will be based on eligibility requirements that “will take into account a player’s ranking as well as previous prize money earnings, according to criteria agreed by all stakeholders.”

RELATED:
Kim Clijsters Is Scheduled To Make Her Comeback This Month At Dubai, And We're Stoked

That sounds pretty fair to me, Thiem, as those lower-level players are actually important to your game AND your bank account. They warm you up in the early rounds, preparing you both mentally and physically to take on players like Rafa, Novak, and Roger. And for you ladies, Aleksandra Krunic, they help you prepare to take on Simona Halep, Ash Barty, and Serena. And the more matches you win against them in any given tournament, the bigger are your paychecks. And Thiem… I’m extremely confident that if you only played against the top 128 players in every tournament, you wouldn’t be nearly as high as World No. #3 because you wouldn’t have as many wins/points. You literally NEED the lower-ranked players to boost yours.

RELATED:
Roland Garros Responds To Coronavirus Threat: It Will Go On, But Seats May Be Empty

Maybe someday in the far away future, professional tennis players will be paid like professional football, basketball, or even hockey players, with juicy contracts, free coaching and training, free medical treatments for injuries sustained “on the job”, free travel accommodations and food, and all of the other perks. But for now, when a murderous pandemic suddenly shows up and instantly crushes the lives of lower ranked players… That’s the time when ALL players SHOULD rally together for the sake of the game if not humanity, and those that have SHOULD help those that don’t. Even America is helping its residents in need with stimulus checks.

Look, this is a sad and hopefully, temporary situation. Professional tennis will eventually get back on its feet, and the Player Relief Fund, while not a total solution, is a much needed aid. Giving to it is also voluntary, but when you’ve got more than enough to live comfortably, or are a multi-millionaire – Dominic Thiem – and don’t contribute anything because you feel the players don’t deserve it even though it’s because of them that you are where you are, that really says a lot about you.

We appreciate your comments and feedback, but as a family-friendly website, we ask that you be please be nice (no name-calling or profanity). Thank you.